I've decided to have a sale.

From today through Black Friday, Small Business Saturday and Cyber Monday, I'm giving 25% off everything.

Use coupon code Holiday2015 during checkout and get 25% off your order (but not off the shipping, unfortunately)!

We had the opportunity a couple of weeks ago to visit the International Wolf Center in Ely, Minnesota. They offered a photography weekend where we were allowed extended hours to visit the center, as well as a guided tour of some of the surrounding area.

The wolf center is a remarkable place, with many exhibits highlighting wolves and the way they live; their history, and many of their interactions with  humans over the years. In addition, they have a dedicated "pack" of wolves, called their ambassador wolf pack, that lives at the center. They have a nice large enclosure, with lots of trees and rocks and even a pond.

Right now they have four adult wolves living in the enclosure, but they add new pups every few years, as well as retiring the aging wolves to their own private enclosures. 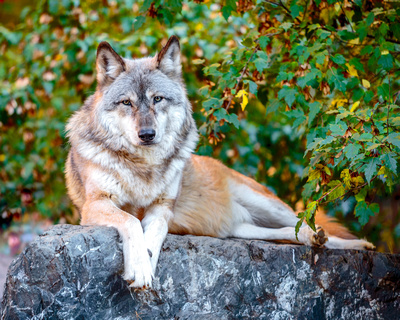 Aidan is the dominant male at the moment. Here he is shown relaxing on his rock, overseeing his pack.